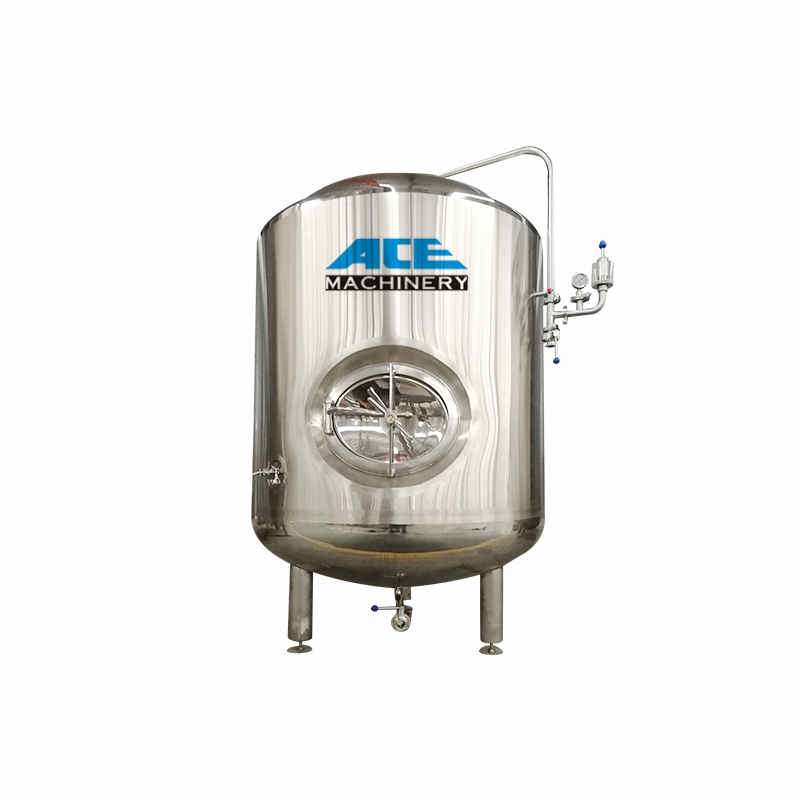 Bright beer tank, often called beer brite tank, serving tank or maturing tank, the bright beer tank is the vessel in which beer is placed after primary fermentation and filtering(not all the beer needs filtering, it's optional), so it can future mature, clarify and carbonate, as well as be stored for kegging, bottling, canning and packaging, In brewpubs, bright beer tanks can even do double duty as serving tanks. We offers Bright beer serving tank that are ideal for nanobreweries/microbreweries. We only use sanitary fittings and hardware.

How long does beer stay in the brite beer tank？

If you are bottling, canning, or kegging a brewery will normally have a beer bright tank for every 4-5 fermenters. Beer will usually spend two days in a brite beer tank to clarify and adjust carbonation levels while most fermenters hold the beer for 10-20 days.

How to calculate the volume of the brite beer tank？

The bright beer tank calculation coefficient ratio is the same as the fermenter, their effective volume is 0.8 of total effective. Then You will usually get yield 100% of the beer in a beer bright tank which helps you plan to pack.

A conical fermenter tank will always leave some portion of the beer behind as you are normally drawing from the racking arm and the yeast sediment levels will vary. You never know exactly how much beer you will get from it. Because of the known volumes, the beer bright tanks can also be handy for tax, packing fee shipping determination, etc.

Is a beer brite tank required for brewing equipment, and some homebrewers?

Most of the brewers will use it to often paired with conical fermenters, thus enabling higher batch conversion rates in more expensive fermenters, resulting in cost savings. Therefore, for the business brewery and factory they are helpful and beneficial, they often use stainless steel brite beer tanks, these tanks can be reused indefinitely, produce no odor or discoloration, and are easy to disinfect.

As for home brewers, that was necessary. They can move beer more easily, don’t need to fill from the dip tube, and the meantime also avoid oxidation.

The differences in using vertical and horizontal brite beer tanks

a. Due to the pressure requirements, the diameter of the bright beer tank is generally limited, so that the capacity of the vertical brite tank can not be made too large, otherwise, it will be very higher, it is difficult to place and move.

If the filtered beer is sent in by compressed air, it will increase the pressure on the storage tank. However, on the contrary, it is because the brite tank has a relatively high liquid pressure, so that the beer can be put into the tank more smoothly. When filling, a smaller delivery pressure can be used.

c. The maximum contact surface of the beer in the vertical brite tank with compressed air (oxygen) is the cross-sectional area of the tank, which is relatively much smaller than the horizontal bright beer tank, so that the degree of dissolution and oxidation effective is better in the bright beer tank.

a. The volume can be made very large. It is also very convenient to clean, including manual cleaning or CIP device (transportable). Since the diameter is generally less than 2.5m, the pressure condition is slightly better. And can be done very long diameter of the tank.

b. The horizontal bright beer tank’s height is equal to the diameter, and the liquid level pressure will not exceed 0.3 MPa. Therefore, the tank pressure can be smaller, and the post fermenter pressure can be lower, but when the brite beer enters the tank (especially at the stage of filtration) When the filtration speed is faster. It is easy to produce swell and foam. The amount of compressed air consumed during filling is also more.