what is mvr evaporator ? 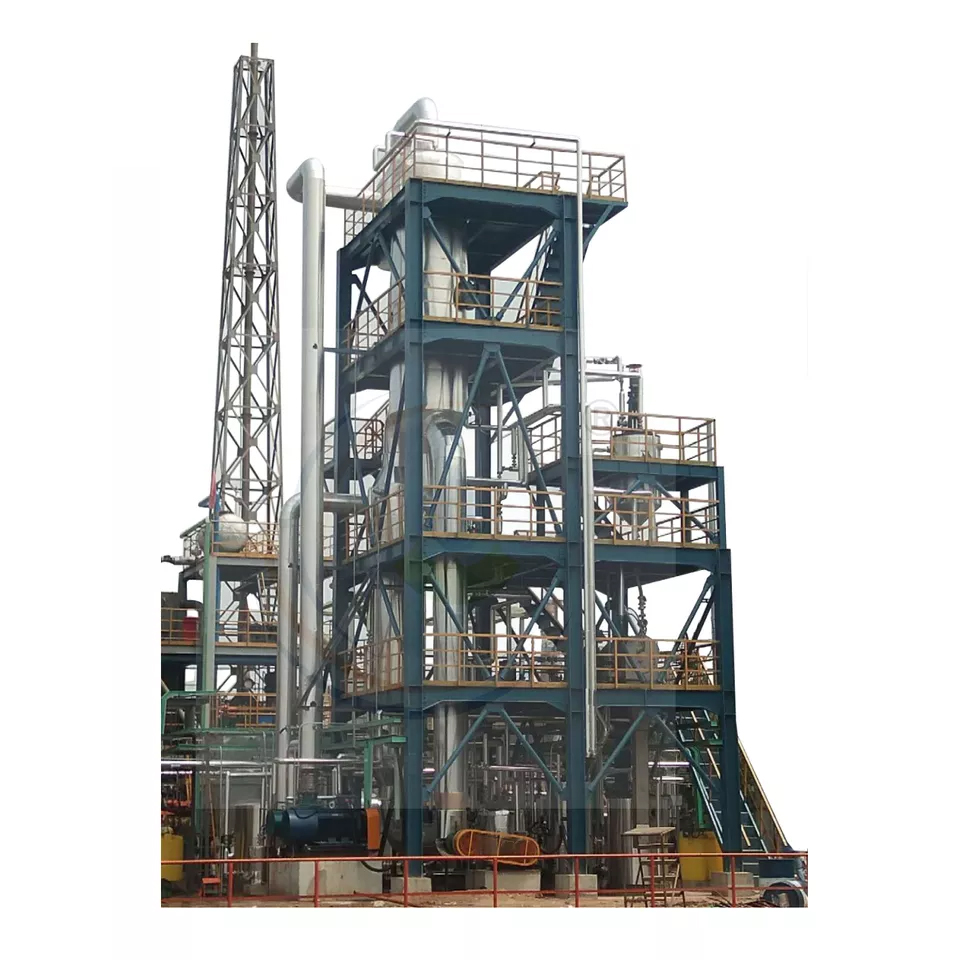 When the equipment is started, a portion of steam is needed for preheating, and after normal operation, the steam required is significantly reduced. In the process of pressurizing the secondary steam by the fan booster, the electrical energy is converted into the heat energy of steam, so the steam required during the operation of the equipment is reduced, while the electricity required is significantly increased.

When the concentration of the product is about 50%, only the MVR evaporator can be completed, and when the required concentration is 60%, flash evaporation equipment needs to be installed.

▪ Low temperature difference makes the evaporation of the product mild 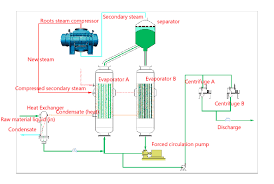 Machines for gas compression are operated according to the positive displacement principle or kinetic principle. In a positive-displacement machine, the moving parts of the machine to separate the suction chamber from the pressure chamber, and the volume of the operating chamber are reduced while the gas pressure is increased. In the case of reciprocating compressors, such a process is achieved by the movement of the piston in the cylinder. In a powered machine, the gas energy is supplied by the high circumferential rotation of the impeller blades. The gas is first accelerated and then decelerated through a diffuser located downstream of the impeller. In this way, the high velocity is converted into pressure energy. Depending on the direction of fluid passage through the impeller, the relevant equipment is referred to as axial, mixed-flow or centrifugal compressor. The most suitable type of compressor depends on the operating conditions of the application in question. The key parameters are the pressure rise to be achieved and the flow rate of the vapor to be compressed. Π is the ratio of the final pressure p2 to the suction pressure p1, defined as the compression ratio. Since evaporative units are often operated in the vacuum range, with medium heating surface loads and small temperature differences, centrifugal re-compressors are usually used.

5) no need for virgin steam.

8)Low operating cost, can be evaporated below 40℃ without refrigeration equipment, especially suitable for heat-sensitive materials.

1)Evaporation of one ton of water requires electricity consumption of 23-70 degrees of electricity.

MVR evaporator, is the abbreviation of mechanical vapor recompression. mvr is a technology that reuses the energy of secondary steam produced by itself, thus reducing the need for external energy.

The secondary steam, after compressing by the compressor, the pressure and temperature can be increased, and the enthalpy increases, which is sent to the heating chamber of the evaporator as heating steam, i.e. raw steam, to maintain the evaporating state of the material, and the heating steam itself will transfer the heat to the material itself to condense into water. In this way, the original steam to be discarded will be fully utilized, recovering the latent heat, and improve the thermal efficiency.

As early as the 1960s, Germany and France have successfully applied this technology in the chemical, pharmaceutical, paper, sewage treatment, seawater desalination and other industries.

Its working process is the low-temperature level of steam compressed by the compressor, the temperature and pressure increase, the enthalpy increases, and then into the heat exchanger condensation, in order to make full use of the latent heat of steam. Except for start-up, no raw steam is needed in the whole evaporation process.

The solution is circulated in a falling film evaporator through a material circulation pump in a heating tube. The initial steam is heated with fresh steam outside the tube to give heat, and the solution is heated and boiled to produce secondary steam, and the secondary steam produced is sucked in by turbo booster fan, and after being pressurized, the temperature of secondary steam is increased and circulated into the heating chamber for evaporation as a heating heat source. After normal start, the turbo compressor will suck in the secondary vapor and turn it into heating vapor after booster, and thus the cycle of evaporation will be carried out continuously. The evaporated water is eventually discharged as condensate.

For cost reasons, single-stage centrifugal compressors and high-pressure fans are commonly used in mechanical steam recompression systems. Therefore, the following description is for such designs. Centrifugal compressors are volume-controlled machines, i.e., the volumetric flow rate remains almost constant regardless of the suction pressure. The mass flow rate, on the other hand, varies proportionally to the absolute suction pressure.

Example: Compression of saturated water vapor from the evaporator from the suction state p1= 1.9 bar, t1= 119 °C to p2= 2.7 bar, t2= 161 °C (compression ratio Π= 1.4). The compression cycle follows the multivariable curves 1-2, with an increase in the specific enthalpy of steam Δhp. For the specific enthalpy of steam h2, by the equation of the efficiency within the compressor (isentropic efficiency): at this temperature, it enters the heater of the evaporator. Based on the amount of steam being drawn in, kg/hr. The Unit multivariable (effective) compression work, kJ/kg. The Unit isentropic compression work, kJ/kg.

The isentropic efficiency (internal efficiency) of the compressor depends, among other factors, on the multiparty index κ and the molar mass M of the drawn gas, as well as on the drawn temperature and the required pressure rise. For the actual coupled power of the prime mover (electric motor, gas engine, turbine, etc.), a larger margin of mechanical losses is considered. A single-stage centrifugal compressor with an impeller made of standard materials is capable of obtaining a water vapor pressure rise with a compression factor of 1.8, and with higher quality materials such as titanium, the compression factor can be as high as 2.5. In this way, the final pressure p2 is 1.8 times the suction pressure p1, or a maximum of 2.5 times, which corresponds to a saturated steam temperature rise of about 12-18 K, with a maximum temperature rise of up to 30 K, depending on the suction pressure. In the case of evaporation technology, it is common practice to express the pressure of water according to its corresponding boiling point temperature. In this way, the effective temperature difference is directly expressed.

The evaporation equipment is compact and has a small footprint and requires less space. Cooling system can also be eliminated. For the existing plants that need to expand evaporation equipment and supply steam, water supply capacity is insufficient, and the site is not enough, especially the low temperature evaporation needs chilled water condensation, it can receive both save investment and achieve better energy-saving effect.