Three-effect falling film evaporator has been successfully applied in the evaporation and concentration process of foodstuffs such as glucose syrup, maltose syrup and alcohol dregs filtrate, which has achieved the goal of energy saving and consumption reduction.

In the process of application practice of three-effect falling film evaporator, it is found that the three-effect falling film evaporator has short heating time, high heat transfer efficiency, concentration ratio can reach 1:5, can make the material liquid with large viscosity easy to flow and evaporate, and the whole set of equipment is not easy to scale. 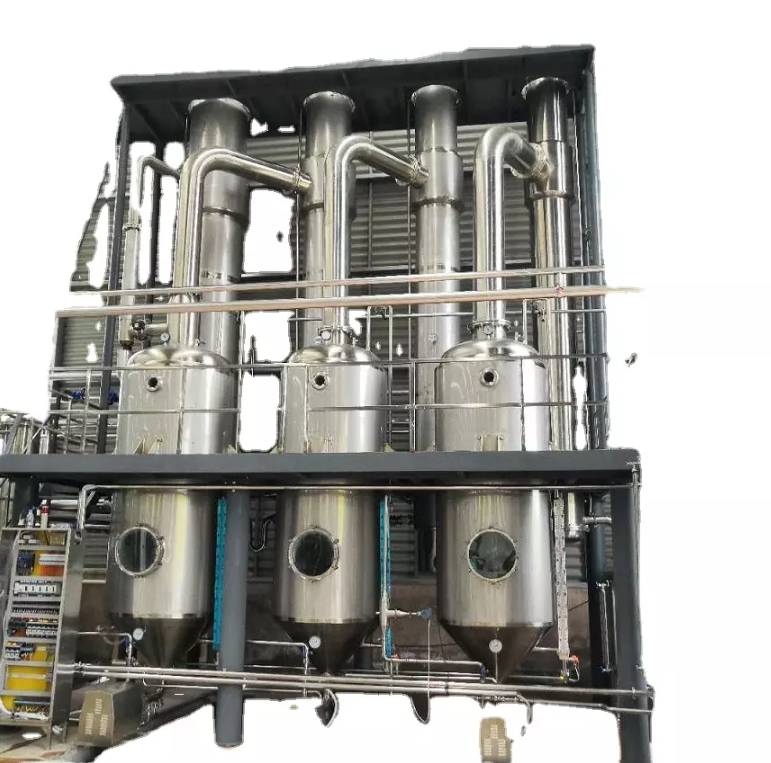 Evaporation (or concentration) refers to the process of evaporation and concentration of solutions containing non-volatile solutes and volatile solvents, mainly by using heating to vaporize a part of the solvent in the solution and obtain.

The material is added from the top of the heating chamber and flows downward in the form of membrane after being distributed by the liquid distributor. In the tube is heated and vaporized, the vaporized steam is led out by the lower end of the heating tube together with the liquid, and the concentrated liquid is obtained after the gas-liquid separation.

In the operation of falling film evaporator, because the residence time of the material is very short (about 5~10s), and the heat transfer coefficient is very high, so it is more widely used in heat-sensitive materials, and also can be used to evaporate the materials with larger viscosity, but it is not suitable for dealing with the solution which is easy to crystallize.