The process of gin distilling

Gin is a type of spirit characterized by the flavor of juniper berries. Gin makers produce gin by infusing a neutral spirit with botanical ingredients during the distillation process. For liquor to be classified as gin in the United States, it must contain at least 40 percent alcohol by volume (ABV). There are many different types of gin, including Old Tom, Plymouth, Genever, and London Dry, and an array of cocktails featuring the popular spirit, such as the classic Gin and Tonic, Tom Collins, and the French 75.

Gin and juniper-based spirits have been around since the sixteenth century. Since then, gin production has evolved into many different styles:

1. London Dry: London Dry is a distilled gin originating in England. Juniper is typically the most immediately detectable botanical component of a London Dry Gin, with citrus, angelica root, and coriander rounding out the back end. Most London Dry Gin producers bottle their gin at high proof.

2. Plymouth: Produced in the South of England and bottled at a lower proof, Plymouth Gin gin is more mellow and distinctly less juniper-forward than London Dry. However, the alcohol content of the distillate is 57 percent alcohol by volume (or “Navy strength”)—much higher than most other gins. While distillers can produce most gin types, Plymouth Gin Distillery in England is the only distillery with the right to produce this.

3. Old Tom: An older gin style with a rich, malty mouthfeel and a distinct citrusy sweetness, Old Tom Gin is sometimes aged in casks or barrels.

4. Genever: Genever (or jenever) is a Dutch precursor to modern gin that dates back to the sixteenth century in the Netherlands. Genever is richer than gin, with a savory, earthy, malty flavor. Distillers make genever in Holland, Belgium, and certain parts of France and Germany, distilling it from malt wine spirits instead of neutral grain spirits.

What Is Gin Made From?

1. A fermentable base: Most alcohol-making begins with an agricultural product that will undergo fermentation. The most common base for liquor is a mixture of grains—for instance, corn, wheat, rye, or malt barley—though producers can use many other ingredients in this stage, like molasses, honey, apples, grapes, carrots, or potatoes. After fermentation, this base produces ethanol, which gin makers sieve out of the solid mixture, leaving them with pure, liquid alcohol.

2. Water: After the distillation process, gin makers will add water to the product to achieve the desired alcohol by volume.

3. Juniper berries: Juniper berries have a woody, pine-like flavor. They are the only required botanical ingredient for liquor to be considered gin and are usually added during the distillation process.

There are three distillation techniques that gin distillers use to purify their ethanol and infuse botanicals into the product:

1. Steeping: For this technique, the distiller mixes the ethanol and botanicals in a pot still—a metal container situated over a heat source. The botanicals are steep in the base spirit. Depending on the flavor profile that the distiller wishes to achieve, they may remove the botanicals promptly or let them steep for up to 48 hours.

2. Vapor infusion: This method involves a modification known as a Carter-head still, equipped with a suspended basket. The basket contains the botanicals and hangs over the surface of the base spirit. When the spirit is heated in the still, ethanol vapors rise into the botanical basket. This step allows the botanicals to release their essential oils into the vapors, which then reliquify, carrying the botanical flavors.

Some distillers use steeping and vapor infusion methods to blend each finished product to make a compound gin. 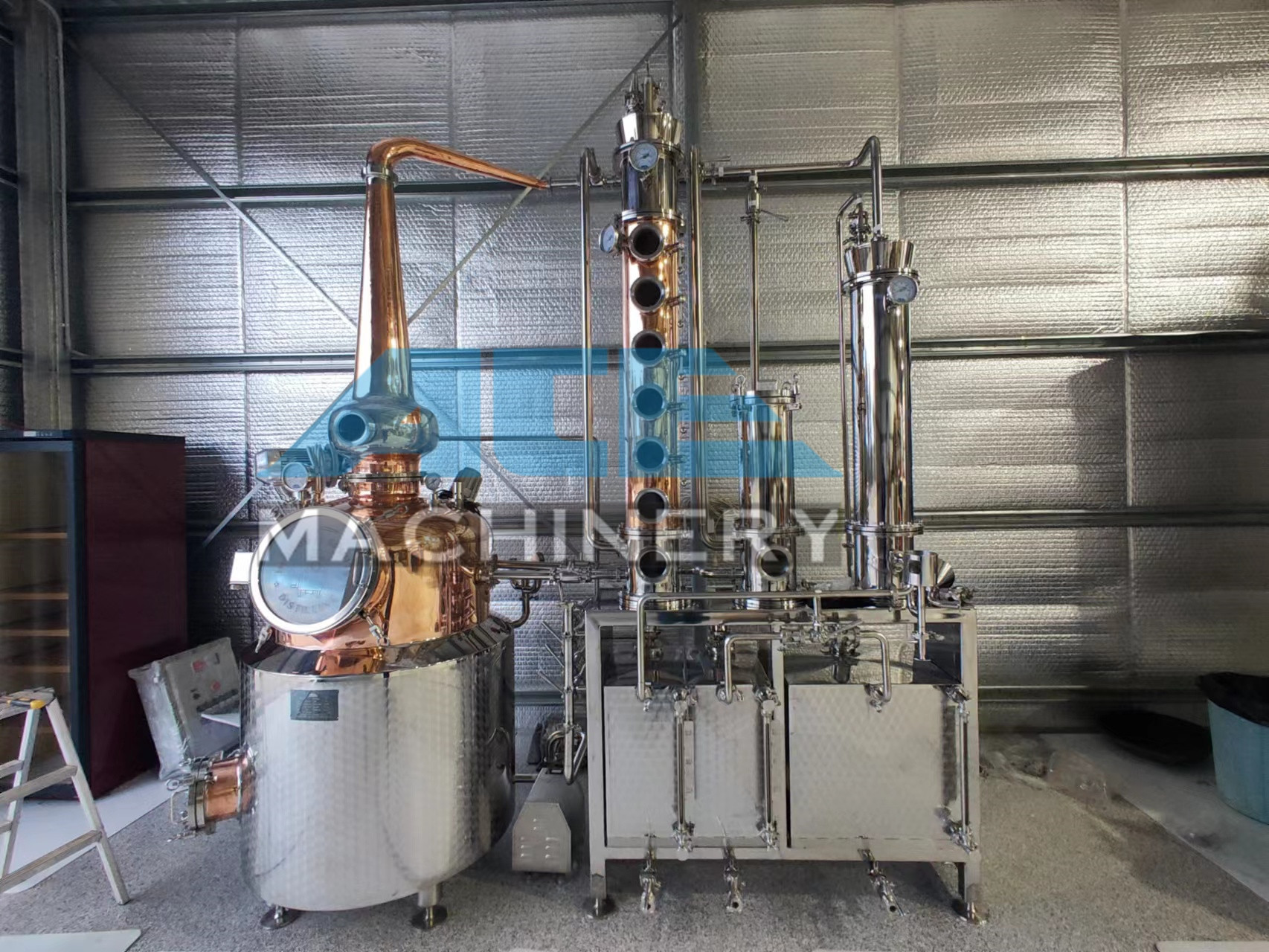 How Gin Is Made

1. Combine the base ingredients. Gin makers will mix dried, prepared grains—like flaked maize and wheat malt—with water and yeast to make a fermentable base. They then heat and stir the mixture (called “gin mash”) to ensure it’s well combined and ready to ferment.

2. Ferment the base. Gin makers then store their base mixture for a specified time—often between one and two weeks—to ferment it fully. During this step, the compounds break down and produce simple, natural alcohol called ethanol.

3. Strain the mixture. Once fermentation is complete, gin makers strain off the liquid from the fermented solids. They’ll discard the solids and use the liquid (ethanol) to make gin.

4. Distill. Distillation is a process that purifies a liquid by heating and vaporizing it, then collecting the vapor as it recondenses into a liquid. The resulting liquid is considered purer (since it leaves many impurities when it evaporates) and more alcoholic. Gin makers take different approaches to distillation—some may distill only once or twice, while others may require distillation and redistillation many times for a more pure result. They may also add botanicals at various stages of the process—some steep their botanicals in ethanol before or between distillings. Others add botanicals during distilling with a special still.

5. Collect and sort the product. The liquid gin makers have after distillation isn’t all the same because as ethanol distills, the resulting liquid changes. The first 35 percent of a distillation results in an ethanol product that contains methanol or acetone and can be highly volatile or toxic—containers of this liquid are called the “foreshots” and the “heads,” and distillers usually throw them out. The following 30 percent contains the “hearts,” the best, most usable product. The final 35 percent are the “tails,” which are impure but can be kept and redistilled for a little more product.

6. Dilute. Once the distillers have their product, they’ll dilute the gin to the desired alcohol content by testing the alcohol by volume (ABV) and gradually adding water. At this step, distillers making gin liqueur may add additional flavorings or sugar to create products like sloe gin, pink gin, or rhubarb gin.

We have gin distillation system, please contact us if you need