The brewing process diagram is a great way to see how beer is made and to get an understanding of the different steps involved. It's also a handy tool for those who are new to brewing. If you're new to brewing, or just want to get a quick understanding of the brewing process, then a brewing process diagram is a great place to start. There are a few different ways to make beer, but the most common method is the two step process. The first step is to make the wort, which is the liquid that will become beer. The second step is to ferment the wort, which turns it into beer 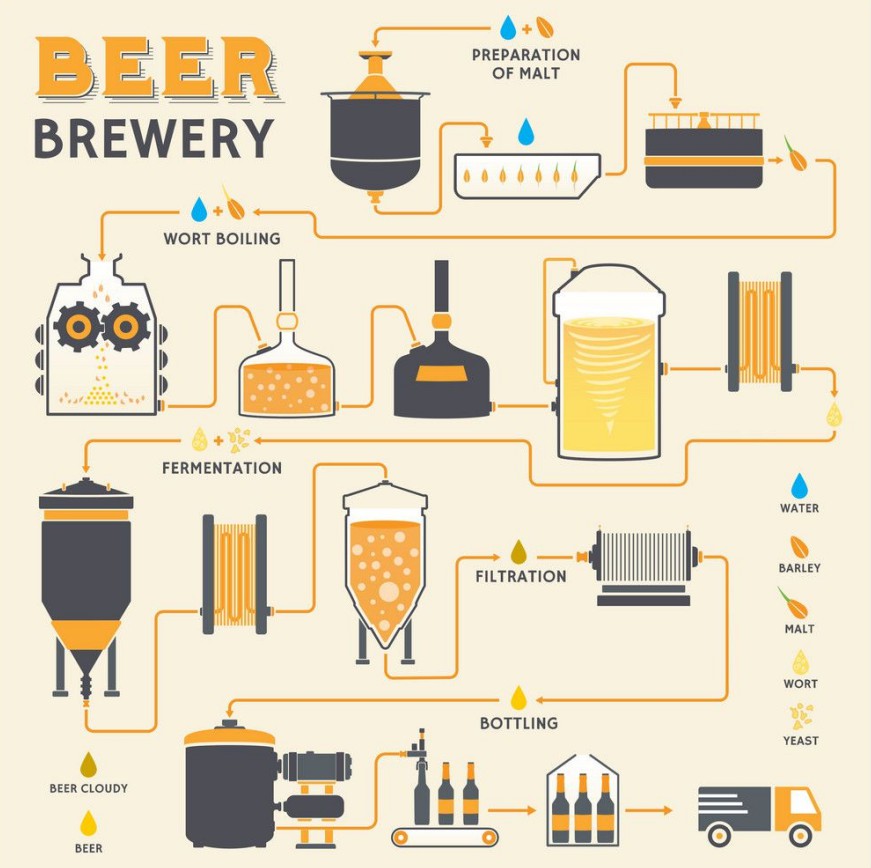 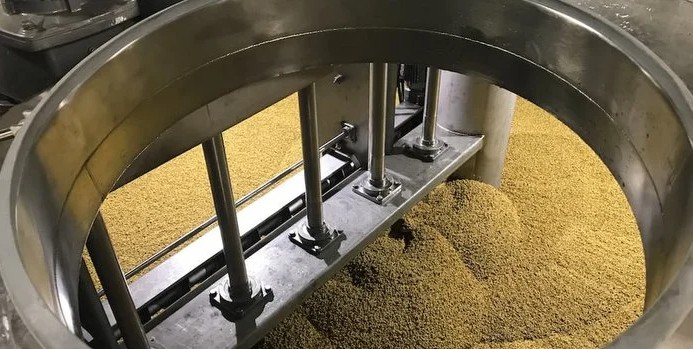 Add the right amount of water (about 20Kg of water according to the measurement of 12°P wort) in the paste pot, turn on the steam heating, raise the temperature to 50℃ and stop heating. Start stirring the paste pot, put crushed rice flour (measured by 12°P wort, about 5Kg) and malt flour (15% of rice flour, about 0.75Kg or add amylase) into the paste pot and keep warm at 50℃ for 20 minutes. Turn on the steam heating and raise the temperature to 70℃ at a rate of 1-1.5℃ per minute, and keep warm for 20 minutes. From the beginning of feeding to the end of pasting, stirring is turned on from the beginning to the end to prevent paste pot. 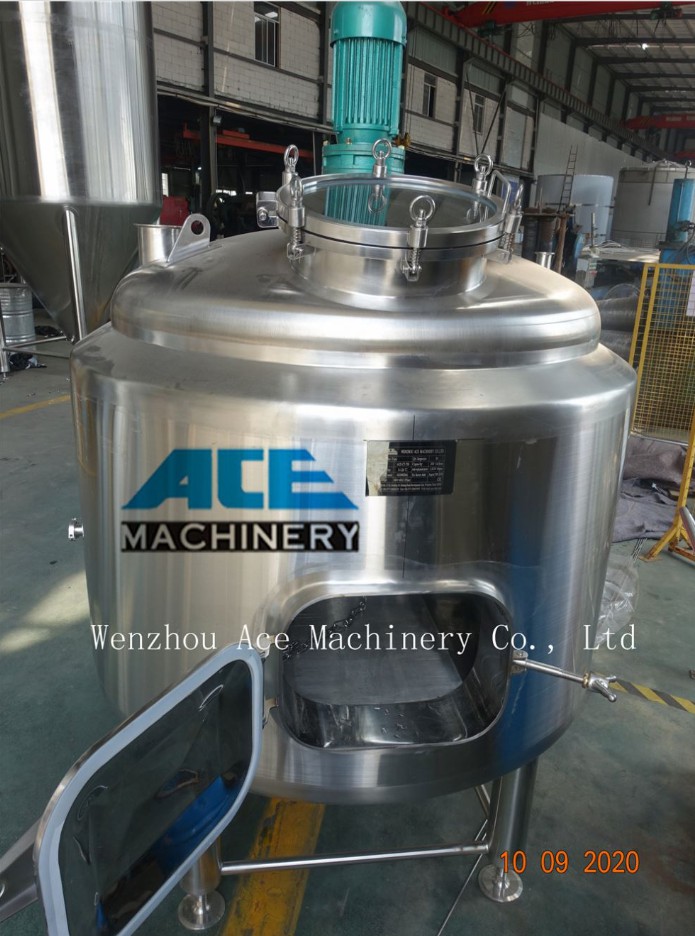 start stirring, turn on steam heating, raise temperature to 78℃ at a rate of 1-1.5℃ per minute, stop stirring, stand still for 10 minutes, and wait for filtration.

start mashing and filtration stirring, pump the mashing into the filtration tank, pump the mash and stop stirring when the mashing is uniform, and stop 10-15 minutes to let it form a natural filtration layer. After the resting time, open the filtering material valve and reflux valve, start the filtering pump, make the wort reflux in the filtering tank for 5-10 minutes, pay attention to the reflux, the flow rate of the pump is adjusted to 20%-30% of the maximum flow rate. After observing the wort clear through the sight glass, close the reflux valve, open the filter valve to the scarification pot, and pump the wort into the scarification pot. After 20 minutes of filtration, take a sample to measure the concentration of the original wort.

the end of wort filtration, open the steam valve, start boiling, wort boiling is to start timing, boiling time of 90 minutes, the wort is always in the boiling state; control the boiling end wort concentration, if the concentration in the specified time to meet the requirements, can be extended. Wort boiling open for 5 minutes and 10 minutes before the end of the boil, respectively, add bitter and aroma hops, heating respectively 40g (0.04%) and 20g (0.02%).

At the end of boiling, close the steam valve, open the discharge valve of the scarification boiling pot and the tangent line inlet valve, turn on the wort pump at the same time, beat the cycle in the scarification pot for 10 minutes, and settle for 30 minutes, then cool the wort.

the wort after boiling is pre-chilled to -6 degree Celsius ice water tank (ethanol and water as mixed medium) through the heat exchanger fittings quickly cooled to the fermentation temperature, the fermentation temperature varies according to the different commercial yeast, commonly used in general below 20 ℃, most of them are in the range of 9-15 ℃. 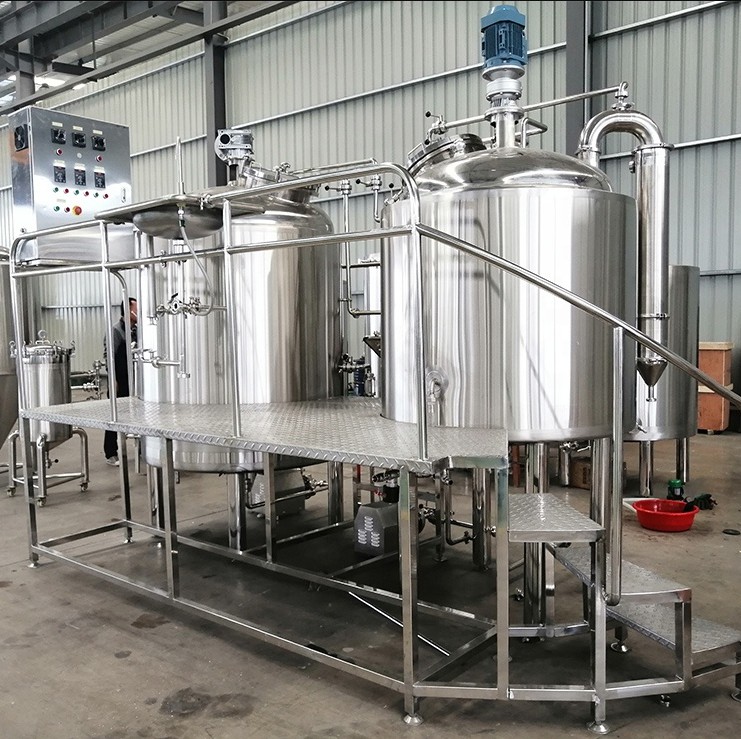 when the fermentation is over, it should be cooled down, the speed should not be too fast, with a gradient of about 1-0.5 ℃ per hour down to about 2 ℃. If the cooling speed is too fast, it will cause the liquid next to the jacket to freeze easily, so that the yeast and some residues cannot settle naturally, resulting in the beer being cloudy easily.

if you are ready to open a craft brewery, you can contact us. Ace’s engineers will provide you with a list of craft brewery equipment and related prices. Of course, we can also provide you with professional turnkey brewery solutions, allowing you more time to focus on brewing delicious beer. Ace very much hope to cooperate with you, my friend!